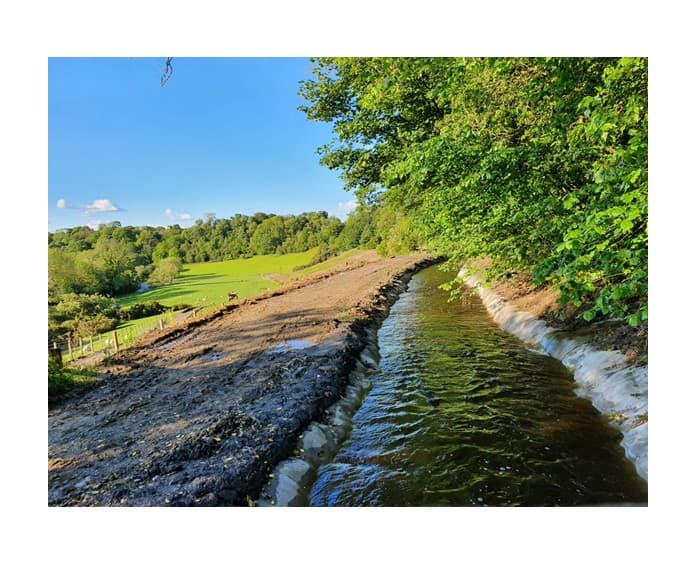 Earlier this year Mackenzie Construction installed over 2000m2 of Concrete Canvas to provide an erosion protection layer for an open canal, which is the only formal water supply to the Union Canal which runs from Falkirk to Edinburgh. The Almond Feeder is just 3km in length and has four masonry tunnels on the route which was opened in 1822.

After the Union Canal was closed in 1965, it reopened in 2001 and as such the canal feeders are routinely checked to ensure their structural security. When the Almond Feeder was checked, it was discovered that there were visual signs of ground movement which raised concerns over the stability of the channel. In order to protect the channel, remedial works were deemed essential, as without the Almond Feeder, the Union Canal would dewater. This would cause significant environmental, public, economic and navigational issues for the areas it flows through.

A solution to protect the channel long-term was needed. Initially, the idea of lining the Almond Feeder with HDPE was considered. However, it quickly became apparent that there were multiple issues with this idea. The main one being, it was not possible to completely dry out the channel, as a result thermally welding the material would have been very difficult.

One solution which was identified as being able to provide the necessary long-term protection against erosion, while also improving the impermeability of the channel was Concrete Canvas. Developed by two students while still at university back in 2004, this material is filled with a dry concrete mix and needs only to be hydrated and left to dry to form a fibre reinforced concrete layer. Produced by Concrete Canvas Ltd, the geotextile is available in a number of thicknesses, and for this project CC8TM, the 8mm thick product variant was used. When compared to HDPE, Concrete Canvas is more durable and is also resistant to UV exposure.

The installation of Concrete Canvas differentiates it from traditional concrete solutions, such as poured or sprayed, in a number of ways. Firstly, it requires no plant or mixing equipment on site, which for projects that may have restricted access is hugely beneficial. Secondly, as the fabric arrives on site rolled and ready to be installed, it can significantly reduce the overall project time. Only hand tools are needed to cut the material into the desired length so they can be installed. Compare this to sprayed concrete, and it is a much more efficient process with significantly less waste. Furthermore, Concrete Canvas uses a high early strength concrete mix which allows it to reach performance strength just 24 hours after hydration. Particularly useful in projects where water is present, Concrete Canvas cannot be over-hydrated and can even set underwater.

For this channel lining project, this was critical as the Union Canal needed to continue receiving water from the Almond Feeder. Sections of the channel were dewatered, during which time the CC8 was installed and then hydrated, after which the water was allowed to run through the section.

The lengths of CC8 were laid transversely across the channel and the ends fitted into a pre-dug anchor trench to secure them using 250mm ground pegs. The anchor trench was then backfilled with either clay or excavated soil. All leading edges of CC8 at the masonry tunnels were captured in poured concrete to provide extra protection against undermining. Additional sections of fabric were then installed with 100mm overlaps and sealed using a bead of Soudaseal Adhesive sealant. These sections were then screwed together at 200mm internals with stainless steel screws.

It took only four weeks to install the Concrete Canvas along the whole channel. The work included channel excavation to remove debris and was completed by just a 5-man crew. 2,125m2 of Concrete Canvas was used along the 3km channel, and the project finished on schedule. Mackenzie Construction were able to install over 40 linear metres of the GCCM per day, demonstrating just how fast Concrete Canvas can be installed.

Trackback from your site.

We utilise technology extensively to provide clients with bespoke surveying solutions that deliver on reporting requirements whilst improving overall time and cost efficiency.